Showing posts from September, 2009
Show all

"Wildlife Art Revealed" at the VMNH

Off to Martinsville today for the opening reception of "Wildlife Art Revealed" September 26, 2009 - January 9, 2010 Virginia Museum of Natural History Martinsville, Virginia Robert along with Paul Rhymer , Julie Bender , and Roger Martin will be exhibiting their original artwork along with informative displays on each of the artists process of creating their art. The exhibition is being held at the Virginia Museum of Natural History in Martinsville, Virginia from Saturday September 26, 2009 through January 9, 2010 with the opening reception on Thursday September 24, 2009. Robert plans on having over twenty original pieces at this exhibition. For more information, visit http://www.vmnh.net/ -This is going to be a really exciting exhibit, its not often that you get to see such a large body of work from indvidual artist in one setting and then on top of that to have displays showing you how the artist goes about creating their work. Go see this show! I have and will be p
1 comment
Read more

I have been paid the ultimate compliment! "Sewanee Barn (Feral Pigeons)" Oil, 30 x 13 Leigh Yawkey Woodson Art Museum has decided to add my painting "Sewanee Barn (Feral Pigeons)"to its collection. I am extremely honored and excited. I recently wrote a thank you letter to the museum and all the staff thanking them for putting together such a wonderful exhibit. I wet on stating that nothing else has even remotely come close to that feeling of belonging to something so great that I felt when sitting under the tent for the first time in 2007. I consider Birds in Art to be the measuring stick for all of my work and artistic endeavors. I feel now that that measuring stick has been raised much higher. Thank you Leigh Yawkey Woodson Art Museum for adding my painting to the Woodson collection. I will continue to strive to do my very best to reach that new height. From one of my all time favorite movies "Explorers" -"It's the stuff that dreams are made
8 comments
Read more 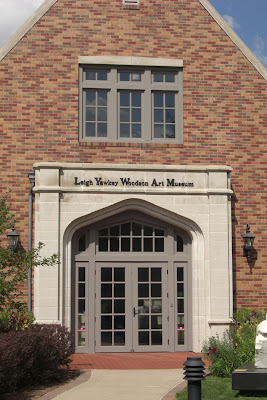 Birds in Art 2009 What an opening! It was a great weekend in Wausau, Wisconsin visiting fellow artist, friends, the wonderful staff at the museum, and of course the public who come to see this great body of stunning work. It goes by way to quickly and its hard to put the event down in words. If you have the opportunity you should really go and see the show, this years exhibit is amazing! You can visit the museums website at www.lywam.org You can become a fan of the museum on Facebook at Become a fan of LYWAM Read the Museums Blog Woodson Wanderings And follow them on Twitter Follow Woodsonart Leigh Yawkey Woodson Art Museum - entrance "Sewanee Barn (Feral Pigeons)" in the exhibition catalog Robert with his painting in the museum
2 comments
Read more

It's that time, off to Wisconsin for Birds in Art. Birds in Art Leigh Yawkey Woodson Art Museum Wausau, Wisconsin September 12 - November 15, 2009 Opening September 12, 2009 9 a.m. - noon "Sewanee Barn ( Feral Pigeons )" Oil, 13 x 30 "Sewanee Barn ( Feral Pigeons )" has the honor of being one of 112 pieces selected to exhibit at the prestigious annual Birds in Art exhibition at the Leigh Yawkey Woodson Art Museum in Wausau, Wisconsin. Organized annually since 1976 by the Leigh Yawkey Woodson Art Museum, Birds in Art presents the very best contemporary artistic interpretations of birds and related subject matter. Each year, a jury selects approximately 100 works to take part in the exhibit. This year, 545 artists from around the world submitted 884 pieces of art. Robert is one of 112 juried artist selected for the exhibit; the show will also include the work of nearly 20 master wildlife artists. For more information please visit: www.lywam.org
1 comment
Read more
More posts