Showing posts from September, 2012
Show all

One of Caldwell’s best works!

Wow!!! Below is a review on Lovetts Gallery's blog about my recent painting that I shipped to them late last week, I am speechless! A Little Rusty Robert Louis Caldwell doesn’t paint anything he hasn’t seen in person. “Every time he's been to the gallery, he goes out taking reference photos,” says Jack. In fact, he’s been saving for a trip to Africa . “Robert has been raising funds to take his trip to Tanzania in four or five weeks. He was hoping he would be able to raise enough funds to go for 14 days,” says Jack. “He had to shorten his trip. He’s never been to Africa. That’s a monumental trip for any wildlife artist. He was so committed to going that he shortened his trip so he could go no matter what. “When he returns, he’ll be working primarily on African safari paintings, because, again, he’ll only paint what he’s seen in person.” Until then, however, he’s working on more local subjects. On a trip to Lovetts Gallery in 2010, he photographed a counte
16 comments
Read more 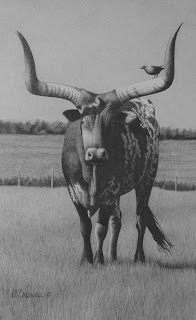 Go and create more without uttering a word! 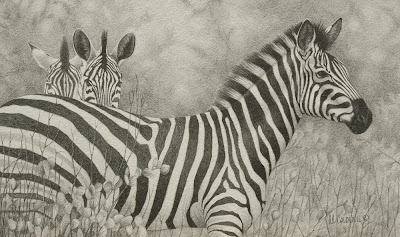 Deadline extended!  10.15.2012  "Striped Horse (Zebra)"  Graphite pencil on Arches 300# watercolor paper  6 x 10  Every day brings my departure to Africa closer... I would like to thank everyone for their enthusiasm about my trip to Tanzania . Your emails of encouragement, suggestions of what to bring, and phone calls reminding me that I don't need to be able to run fast, just faster than everyone else have been greatly appreciated! My Advance purchase agreement of an original from my African adventure has been greeted with so much interest that I have extended the deadline to October 15, 2012. I have also included in this special purchase three drawings of African subjects that I currently have in my studio which you can add to your collection now. These three drawings are "Serendipity (African Elephant)," "Striped Horse (Zebra)," and "Contemplation (Chimpanzee)." These three drawings fall under the Level 2 discoun
Post a Comment
Read more
More posts