Yeah, I am definitely drawing that! 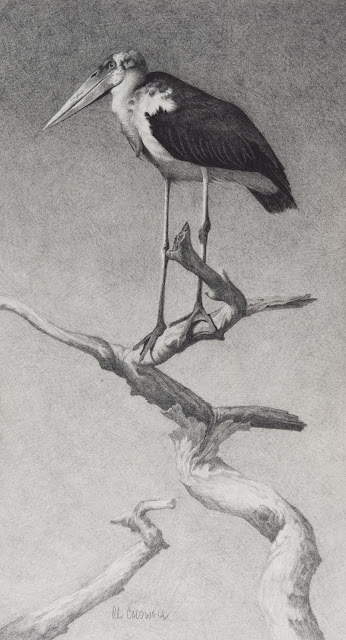 These are such odd birds, and some would say ugly; I find them disturbingly beautiful. With its bare head, hunched shoulders, and skinny bare legs, the Marabou Stork is often referred to as the Undertaker. Not only for the way it looks but also for its vital role in the ecosystem. They eat carrion and clean the land of dead animals.

Although I will stop to photograph these birds anytime when I am in Africa; my 2016 safari-inspired this particular scene. I was in the Serengeti and up and about before sunrise, in the Land Cruiser slowly driving and scanning the early morning terrain for movement. The sun was starting to hit the tops of the trees, and up ahead, I noticed a form in the top of a dead tree, a Marabou Stork. We stopped and sat back as the sun illuminated the top of the tree and brought the Undertaker into full view. That scene, for some odd reason, brought to my mind the novel by Stephen King, “The Stand.” I was left with a feeling of an unwanted presence judging me and trying to influence me in a direction, not of my wanting.

As we drove off, my last thought was, Yeah, I am definitely drawing that! The question is, was I inspired or influenced by the scene?

Popular posts from this blog

Opening this Saturday! “The Birds” Invitational Show Lovetts Gallery Tulsa, Oklahoma October 24, 2015 I cordially invite you to "The Birds" show at Lovetts Gallery in Tulsa, Oklahoma on October 24, 2015! An exhibition of original works of birds, about birds and inspired by the Hitchcock classic (though not necessarily all of the above). I have created two new pieces specifically for this show and they are now avaiable excluisvely through Lovetts Gallery. New birds! " Ristle-tee, Rostle-tee, now,now,now (Raven) " Graphic Pencil on 1/2 in. Maple panel 26 x 16 $2,900.00    "The Generals (Rooster) " Oil on 1/2 in. Maple panel 26 x 16 $5,900.00 Lovetts Gallery www.lovettsgallery.com 918-664-4732 I humbly thank you for your continued support of my art and sincerely appreciate you allowing me to share this news with you! If you have any questions about either of the
Read more 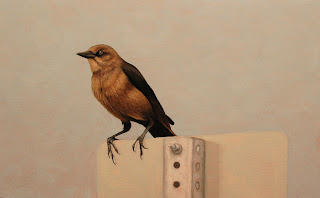 Busy in the studio this week… I currently have three paintings in progress in my studio, all at in different stages. With my exhibit and painting demonstration coming up in early March at Lovetts Gallery in Tulsa, Oklahoma I am a full throttle painting. Two of the paintings are of medium size and the other is smaller, a 5x8. This small piece is actually for the Masterworks in Miniature exhibit at Gallery One in Mentor, Ohio. As I said it measures 5 x 8 and it has the first layer of color block in. I got the reference for this grackle from one of my many visits to Charleston, South Carolina and I can still remember how cold it was when I was out there shooting the reference material. I plan to start back on this one with the final layer of color as soon as I get the first layer of color blocked in on the piece below. The reference for this painting came from one of my many walks in the Fan district of Richmond, Virginia, the architecture here is fantastic. I am currently blocking
Read more

I could smell the difference... 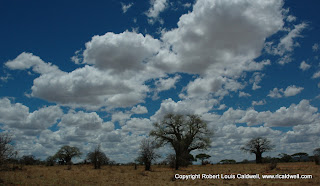 My adventure in Africa 2012! Excerpts from my field sketchbook/journal. Day1 As soon as I stepped of the plane and onto the tarmac I could smell the difference... Arrived in Kilimanjaro airport in the middle of a thunderstorm, I have to tell you that I wasn't expecting that at all. A very small airport it didn't take very long to pick up my luggage and make my way out to the lobby where my guide and owner of OEA Safari Humphrey was waiting for me. Humphrey drove me through the pouring rain down in a complete blacked out landscape through the out skirts of Arusha where we ended up at his and his lovely wife's guest house. After some light snacks and a couple of glasses of a great South African Piontage I went to the guest house and called "it quits as I listen to the rain beat down in Africa... IN AFRICA!!!" Day 2 "Woke to the sound of pounding rain - Awesome!"  After a fantastic breakfast of fresh fruit, eggs and bacon and I have to tel
Read more